Gus is an entrepreneur and a swimming enthusiast. He began his swimming journey soon after turning 8 years old and by the age of 14 he qualified for his first international swim meet representing the Brazilian Junior National Team. It did not take long for Gus to understand his passion for the sport and decide he wanted to swim in college in the U.S.

At the age of 18 Gus moved to Roanoke, Virginia, and while representing the Virginia Gators he won a few National Titles and broke a few state and YMCA National records. In 2003 he enrolled at Virginia Tech and began his collegiate swimming career. While at Vermont, he became the first All-American swimmer in the school history and earned four individual conference titles in the butterfly and distance freestyle events. In 2004 he represented his home country at the FINA World Championships and finished 9th in the 200m Butterfly.

After graduating in 2007, Gus continued his swimming career at a professional level and retired in 2010 after representing his home country at the Nation's Cup in Canada. During his final years as a competitive swimmer Gus founded Planet Swim and began his coaching career at the Bolles School under the guidance of former Olympic Medalist and Swim Coach, Sergio Lopez. Since then, Gus has focused on developing young swimmers and has had the opportunity to work with several world class athletes including World Championship/Olympic qualifiers and medalists.

With Planet Swim, Gus hopes to empower individuals to reach their full potential both in and out of the water while building long-lasting confidence to be carried out though life.

Born in Bratislava – Slovakia, Katarina started swimming at the age of 10. Soon after, results started showing as she became a National Champion at the age of 14. Since then Katarina broke many national records, competed at European and World Championships as well as the 2012 London Olympic Games. After graduating in High School from St. Paul’s Anglican High School in Brisbane – Australia, she decided to pursue a collegiate swimming career and joined the Virginia Tech Hokies. During her collegiate career Katarina broke multiple school and conference records, was awarded for her outstanding freshman and senior year, became an ACC champion as well as NCAA All-American. 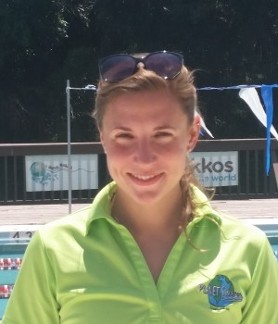 Coach Raquel has over 25 years of aquatic's experience. From teaching to coaching to managing, she is a well-rounded aquatics expert. She is an ASCA Level 3 certified coach who began her coaching career with Porto Ação Swim Club in Brazil. In 2004, Coach Raquel moved to Jacksonville where she was the Aquatics Director at the Winston Family YMCA in Ponte Vedra. Most recently, prior to joining Planet Swim, she served as an age group coach at the Episcopal Amberjax Swim Team and at the Loggerhead Aquatics; and was Coach Calado's assistant coach at Nease High School. Coach Raquel currently serves as the Teaching Curriculum and Instructors Coordinator at Planet Swim's swim school program and coaches our Sailfish 1 training group with Planet Swim's year-round swim team at the Ponte Vedra Beach location.

Kathryn Saurborn is a West Virginia native born in the city of Fairmont. Her swimming career began when she was about 8 years old for a club team named Fairmont Area Swim Team, FAST. She attended East Fairmont High School and became state champion in the 50 and 100 yard freestyle. After high school, she went on to swim collegiately for Fairmont State University. During that time she earned Bluegrass Mountain Conference Swimmer of the Year. She became a 3X All-American in the 50 and 100 yard butterfly and a 2X Honorable Mention All-American in the 100 free. Once her senior year of college ended, she continue her swimming as a member of SwimMAC Team Elite in 2013-2014, where she got to train with Olympians Ryan Lochte and Cullen Jones. In 2018, she still continues her swimming career with Plant Swim Team of Ponte Vedra, Florida.

Coach Kathryn loves her Rottweiler named Shiloh and in her free time she likes to spend time with her friends and family. Kathryn has been a big help at Planet Swim where she teaches lessons as well as taking a position of Office Manager/Lesson Coordinator.